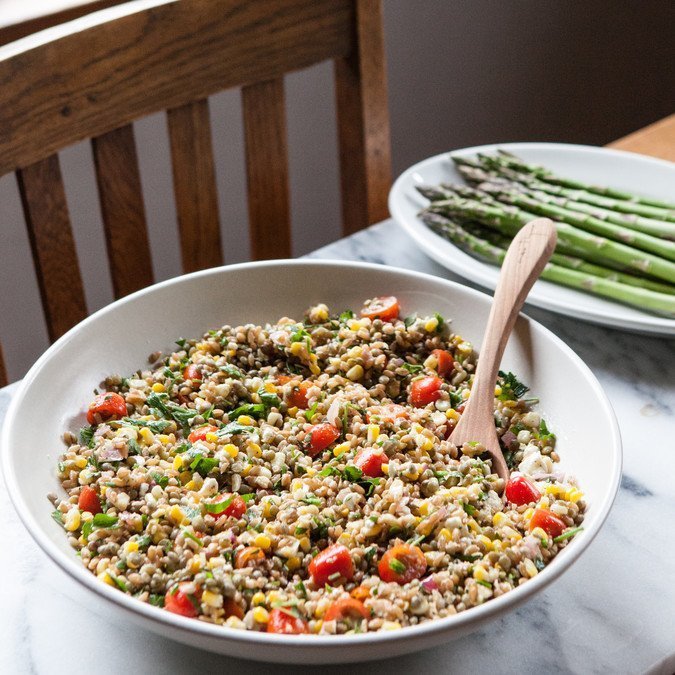 I’ve been in the slow process of cleaning out my home office this week, and yesterday I stumbled upon some notebooks containing previous year’s Summer Bucket Lists (if you may recall, I used to write sort of elaborate lists of things I wanted to learn, see or accomplish during the summer season). Scrawled throughout these pages were lines about baking sourdough bread, starting a garden for cut flowers or taking a road trip and discovering new towns in the region (or beyond). This year I don’t have such a list. The days feel more like a race to get our work done, figure out how to feed ourselves, take care of the plants in the backyard, be a good friend, be a good sister, be a good mom and a good partner. Walk to the park. Point out airplanes, trucks, buses, vans, birds and flowers with Oliver. Drink a cocktail and watch The Handmaid’s Tale with Sam at night. Buy wedding presents and shower presents. Show up.

These simple things seem to take up all of the time that perhaps I once used to spend baking more bread or taking more road trips. I remember the one summer a few years ago when I made loads of peach jam, ate it with homemade yogurt, sewed a gigantic quilt, and wrote a book proposal in my free time. That, my friends, is not this year. Instead, this summer I’m hoping to simply cook more and get outside more. Oliver has some new sandals he’s jazzed about and we bought him a sun hat with realllllllly full coverage that he tries to rip off, as if he knows it’s slightly humiliating to show up at the neighborhood park donning such a wardrobe atrocity. I got him a little mini rake to accompany his sand pail and shovel, and have big plans to head to the beach to shovel, rake and cap things off with a vanilla soft serve cone.

The one trick I always have for guaranteeing I’m cooking more is to think a lot about Future Megan — in other words, my Tonight Self or Tomorrow Self. We try to make a pot of grains on the weekend and have some fresh herbs and lemon around, and thanks to summer produce (tomatoes! corn! tomatoes again!), the rest often kind of comes together naturally, however haphazardly, which was the case with this summery salad.

In one of the classes I teach at The Pantry here in Seattle, we make a similar whole grain bowl with millet, but I received some beautiful farro and french lentils from a whole grain company in Canada that I love, Grain, and was excited to put both to work this week. The lentils are a nice touch because they make this much more of a complete meal, so we can spend a little less time thinking through  the components of dinner and a little more time shoveling and raking, and stopping to wave at passing trucks.

This salad is a particular favorite when all of the ingredients are at their peak of freshness (now!), and are given space to just do their thing. A tough recipe to mess up, the one piece of advice I do have here is to try your best to be attentive while cooking the lentils so as not to overcook them — I taste them every 5-8 minutes or so to make sure they’re still nice and toothsome. As for making this salad even simpler, you can certainly use frozen corn although I will say it’s so, so good with fresh, sweet summer corn. I generally always double the dressing recipe, too, and save half for a future green salad, soba noodles or a whole grain bowl later in the week.

Cook the farro: In a 2-quart saucepan, bring the farro, 2 cups water and a pinch of salt to a boil. Decrease the heat to low and cover. Simmer until farro is tender and most of the liquid evaporates, about 30 minutes. If there is excess liquid after the farro is done cooking, simply strain it away. Remove from heat and set aside for 10 minutes to cool.

Meanwhile, rinse the lentils. In a separate small saucepan, add the lentils and 1 cup water. Bring to a rapid simmer over medium high heat, then reduce the heat to low (should be a gentle simmer) and cook lentils until just tender, about 25 minutes. Strain, rinse with cold water and set aside to cool.

Cook the corn: In a large nonstick skillet, warm the olive oil and add the shallot. Cook over medium heat until just soft, 3 to 4 minutes. Add the corn and generous pinch of salt and increase heat to medium-high. Cook corn until it’s just beginning to brown on the edges and soften, about 8-10 minutes. Add the garlic and stir to combine. Cook an additional 2 to 3 minutes.

Whisk together all of the dressing ingredients. In a large salad bowl, toss together the cooked farro, lentils, corn mixture, tomatoes, feta and herbs. Fold in the dressing. Serve immediately.