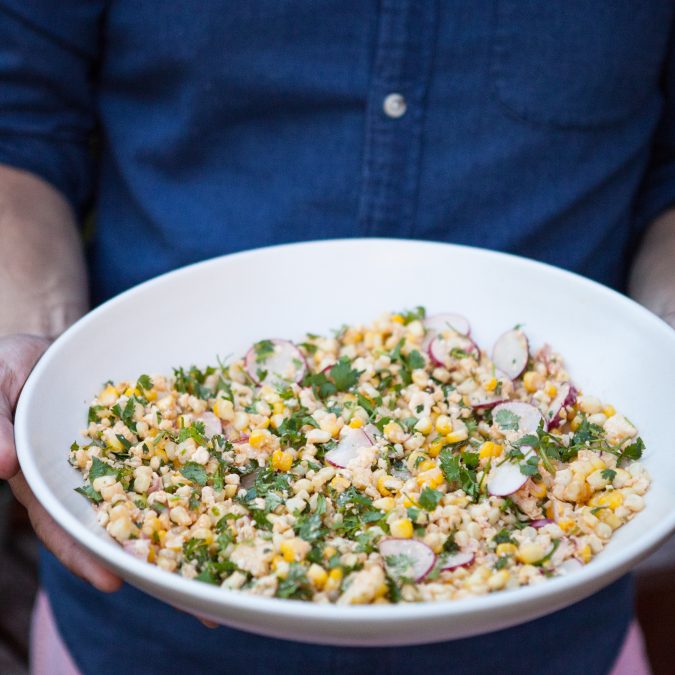 A few weeks ago we had our parent’s group over to the house for a barbecue and potluck in the backyard. We all have babies around the same age and they all go to bed around 7 pm which, frankly, makes for a very early barbecue, so we met in the late afternoon; Sam and I picked up sausages, beer and all the fixings and asked everyone else to bring a dish to share. The following day I started cooking from Kristin Donnelly’s new book, The Modern Potluck, and wished I’d started sooner as this corn salad would’ve been perfect to share: it’s got late summer, sweet August corn, effortless cooking written all over it. It’s smoky and a little bit creamy with a splash of lime and nice pops of color from the radishes and cilantro. Apparently Kristin was inspired here by the Mexican street snack elote, corn on the cob slathered with mayonnaise and cheese. And while I have to admit that I’ve never tried elote, if it’s anything like this salad, I’m 100% on board. 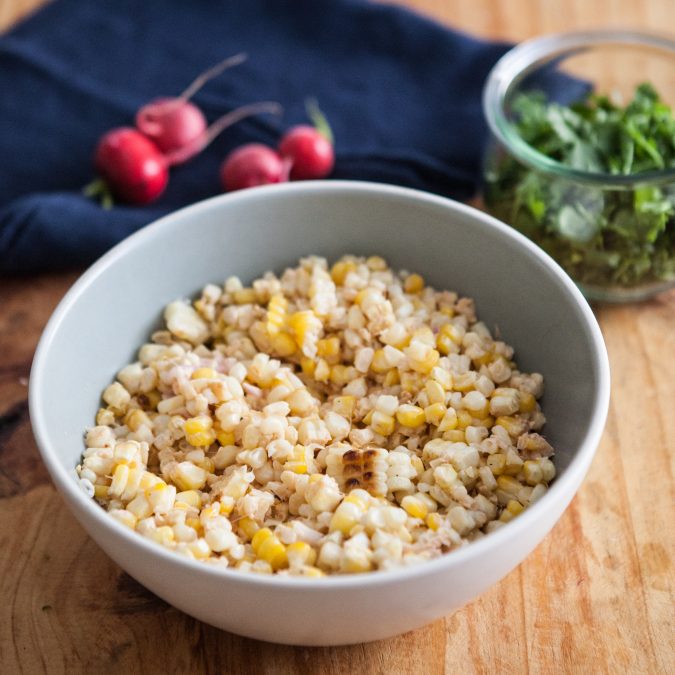 I met Kristin for the first time last week when she was in town promoting her book, but I feel like I’ve known her forever. You may be familiar with her name from her long stint at Food and Wine — or perhaps you know her luscious lip balms. I think we first started chatting when she mentioned my granola in Food and Wine, and then we talked periodically about small business things and cookbook writing. When we met for pizza last week, conversation meandered over to motherhood as it tends to these days with my mama friends, and in many ways it was fitting as the impetus behind Kristin’s book really came to her after she had her daughter. In her introduction, she talks about it, and about lamenting the loss of big dinner parties: “After I had my daughter, Elsa, those types of dinner parties seemed not just daunting but also impossible. Because I couldn’t eat at restaurants as much as I used to, I felt that my social life was starting to fall apart. That’s when I remembered potlucks. What a brilliant idea! I could focus my energy on one dish and get a full meal in return, all the while hanging out with my friends or meeting my neighbors.” 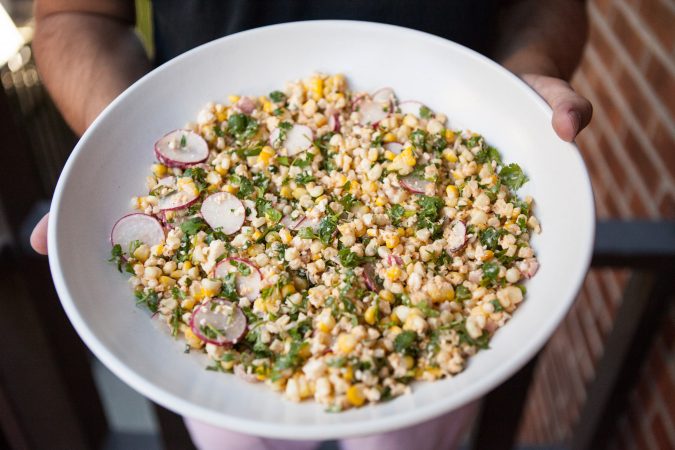 But that of course makes it sound so simple, right? Later Kristin recognizes this, noting how we live in tough times of diet restrictions and hashtagged food — there’s even that pressure to make a memorable dish maybe you’ll become known for. Something seasonal, something beautiful. And that’s where her book comes in: with some reassurance that simple potluck food can be inspiring, too. And in typical potluck fashion, she asked some friends and writers to contribute recipes to the book (my Chocolate Cherry Millet cookies are representing in the Sweets section!) I have to say that many of the recipes are also great new parent meals or simple ‘stock the fridge’ dinners that you can easily freeze and thaw when things get hectic, as they’re bound to do. In fact, there’s a whole chapter devoted to the 9×13 pan: pure genius.

Giveaway: Clarkson Potter/Random House & Corningware have teamed up to do a giveaway on the site today. One A Sweet Spoonful reader will win a copy of Modern Potluck plus a special delivery from Corningware. To enter: Leave a comment below telling me your go-to potluck or picnic dish. Giveaway ends August 30, 2016 at 9 am PST and is open to US readers only.

Grilling corn for this salad is really easy, but if you don’t have a grill (or grill pan), it’s not a problem: simply boil the ears of corn. Kristin advises not to use frozen kernels though, which tend to be less milky than corn freshly cut from the cob. I ended up halving this recipe as it makes quite a lot, and it worked beautifully, so if you have a smaller family or crowd you could go that route. And we found that while it’s certainly best eaten the day it’s made, the salad keeps just fine in the refrigerator for up to 2 days.

Recipe from: The Modern Potluck

Light a grill or preheat a grill pan. Pull back the corn husks but leave them attached; remove and discard all of the silks. Fold the husks back up over the corn. Grill the corn over moderately high heat, turning occasionally, until the husks are well browned and black in spots and the corn is very hot, about 10 minutes. Transfer to a platter and let cool.

Meanwhile, in a large bowl, mix the shallot with the lime juice and let stand for 5 minutes. Whisk in the mayonnaise and paprika.

Using a serrated knife, cut the corn from the cobs (you should have about 8 cups of kernels). Add the corn and the cheese to the dressing and toss. Within 1 hour of serving, add the radishes and cilantro, season with salt, and serve.

POTLUCK PREP. The salad without the radishes and cilantro can be made earlier in the day and refrigerated. It can stand at room temperature for up to 2 hours.