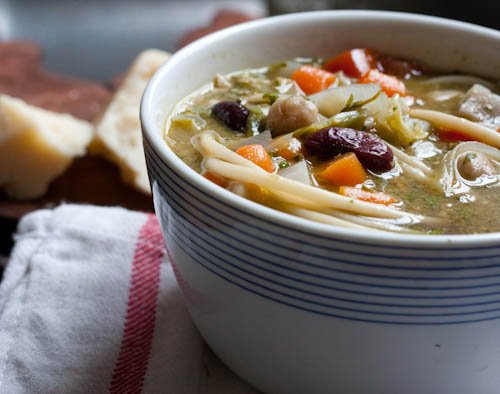 There’s nothing like making a hearty soup to break in a new kitchen. And you know how it is when you move: until you get the pantry stocked and a few items in the fridge, there’s a lot of pizza and canned soup going on (or, in our case, burritos). So it was a welcome break in routine this morning to wake up to a stormy Monday, hot coffee waiting in the kitchen, and  some free time to get busy in the kitchen. Finally.

Now a quick business note before we talk about minestrone. You’ve probably noticed: A Sweet Spoonful got a face lift! Have a peek around. There are some new features and pages, giving you the ability to print recipes, read travel pieces and restaurant reviews, and browse previous posts via photos. I also added a little Amazon page: just things I like and use often in the kitchen that I think you may like, too. The new site just went live a few days ago and somehow I’ve lost a lot of subscribers in the transition (not really sure how), and there have been a few mass email snafus (hopefully we’ve stopped that from happening in the future). So please make sure your readers/RSS are up to date and/or that you’ve subscribed via email in the box to the left. I’d love for you to stick around!

Now on to the important stuff: hearty, winter soups. Minestrone is an Italian staple and is often known as “the big soup.”  It’s kind of ironic that I found this recipe and set out to the store to purchase all of the ingredients (as our kitchen is still under- stocked at this point) because traditionally, this was a soup that you kind of add whatever’s in the fridge–from meats, to rice and pastas, to vegetables.  Most minestrone’s I’ve had in the past are thick, tomato-based soups. But I was drawn to this particular recipe because it called for pancetta (hello!) and instructed you to simmer the soup with a Parmesan rind. Intriguing. It’s more of a brothy soup, with lots of vegetables and incredible flavors. Perfect for a stormy afternoon…of which we’ve been having quite a few of around here lately. 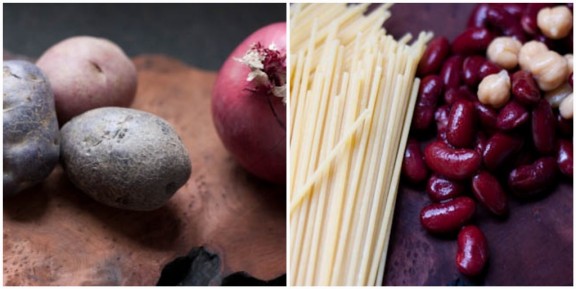 This recipe is from the Culinary Institute of America’s The New Book of Soups. I did receive this book  for free from the publishers; I actually wrote to them specifically about it because I’d heard such great things and was curious to take a peek. Now I’m not generally one who likes cookbooks devoted to one dish. There’s something overwhelming about them. But I’m also someone who loves soup, and living in the fog 85% of the year makes it the perfect comfort food. The book is organized intuitively in categories including Cream Soups, Stews, and Bisques and Chowders. There’s also great information on shopping for soup ingredients, aromatics, making homemade broth, and selecting the proper soup pots or stock pots. I wanted a particularly hearty soup, so I did adapt the CIA’s recipe just a bit, adding more carrots, beans, and pancetta than they suggest. 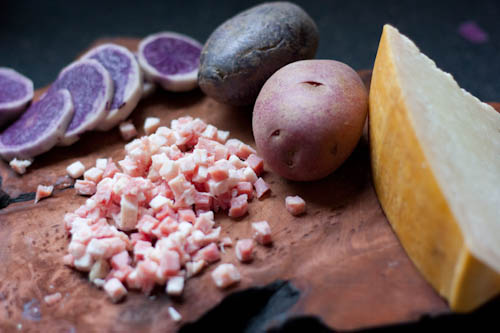 A few notes on ingredients: I did use store-bought chicken broth, mainly because Trader Joe’s makes a nice low-sodium,  free-range chicken broth that I’m fond of. They also sell cubed Italian pancetta which I used for this recipe. And for potatoes, I bought purple potatoes to add a bit of color. But play around with any ingredients you have at home. You could also easily make this soup vegetarian by omitting the pancetta and using vegetable broth.

Heat the oil in a soup pot over medium heat. Add the pancetta and cook until the fat melts, 3 to 5 minutes. Do not allow pancetta to burn. Add the cabbage, onions, celery, carrots, and garlic. Cook until the onions are translucent, 6 to 8 minutes.

Add the broth, potatoes, and Parmesan cheese rind. Bring to a simmer and cook until the vegetables are tender, about 30 minutes. Don’t overcook. Meanwhile, cook the spaghetti in a small bot of boiling water until tender. Drain. When the vegetables in the soup are tender, add the cooked pasta, tomatoes, chickpeas, and kidney beans. Remove and discard the Parmesan rind. Season the soup to taste with the pesto, salt, and pepper. Serve in heated bowls sprinkled with cheese.