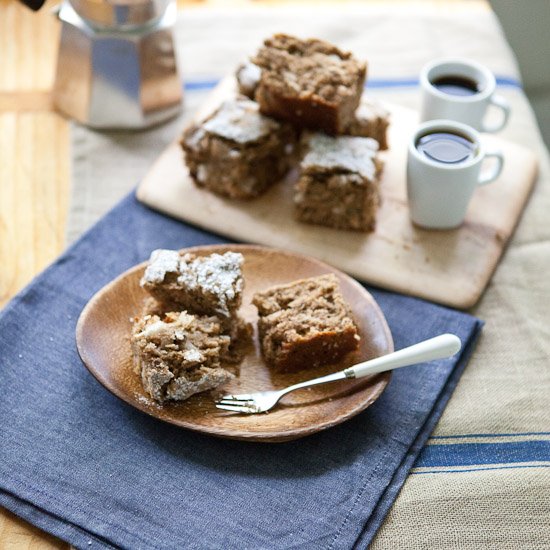 There are many reasons to make cake for breakfast. Especially if that cake is made from 100% whole-grains and uses ripe bananas, fragrant coconut and toasty walnuts with just a touch of natural sugar. The main reason, today, is that it’s time for a new album. Have a seat. Let me explain. We had a small dinner party in our backyard last week to celebrate a friend’s new business idea. She needed some photos for her website, so she offered to cook a summery spread if we’d host it and I’d snap a few shots. It was one of those ‘let’s plan it 6 weeks ahead to jive our Google calendar’ affairs, but at the end of the night — after too much wine and a rollicking game of Farkle — we were so happy to have had the company, the music, the Indian-spiced roast chicken and rosé. But most of all, the company, in what has felt like a summer that’s had too much work and not enough company. 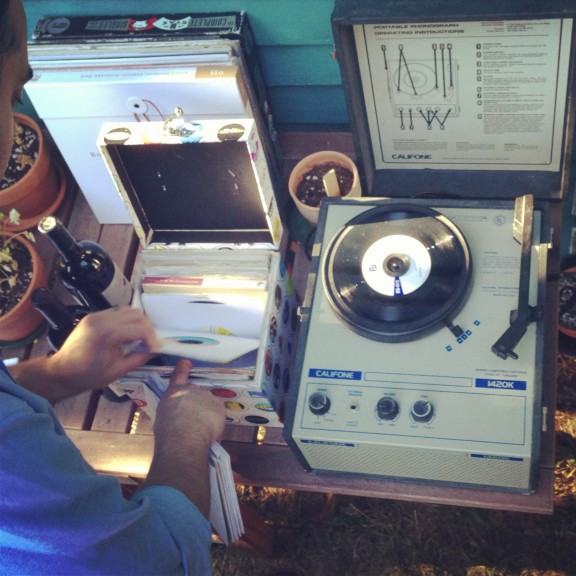 If you’re anything like me, you may skim the very front pages of a magazine — the editorial letter. It can be a bit fluffy, and I’m always eager to get to the heart of the publication anyway. But late the other night, I was flipping through a few food magazines and began reading the Editorial Letter in Cook’s Illustrated. I have to say, it struck a chord more than the Pasta Puttanesca or Fresh Peach Pie that followed. 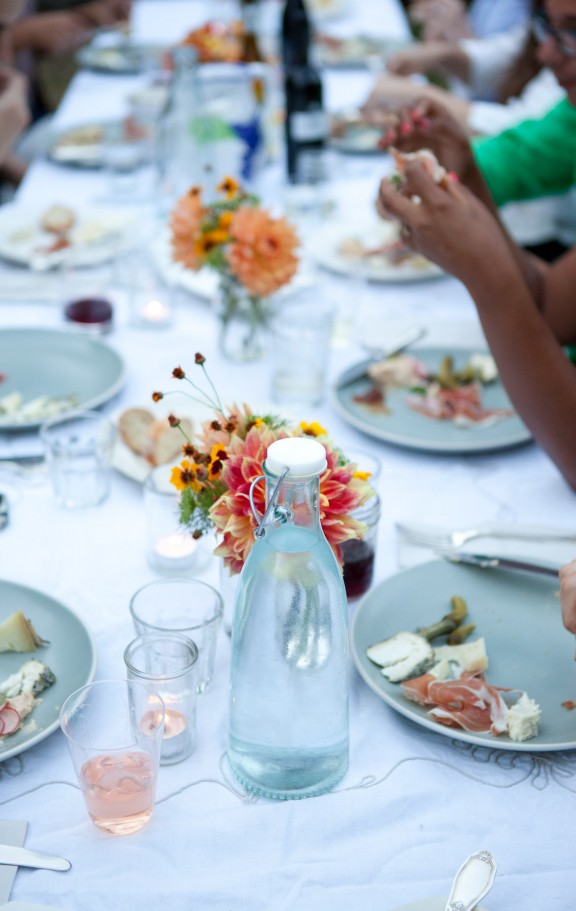 In it, Christopher Kimball discusses the project of organizing all of his old family photos: “Perhaps life can be judged by the number of family albums one has accumulated. Some lives are a straight line between birth and death; one album does the trick. Others live lives with many chapters, each one starting with a new photo placed on a crisp white page. Dr. Seuss wrote, ‘Everyone is just waiting, waiting for the fish to bite or waiting for wind to fly a kite, or a pot to boil, or a Better Break, or a string of pearls or a pair of pants or a wig with curls, or Another Chance.’ And so, we sometimes find ourselves at the point when we need to begin a new album.” 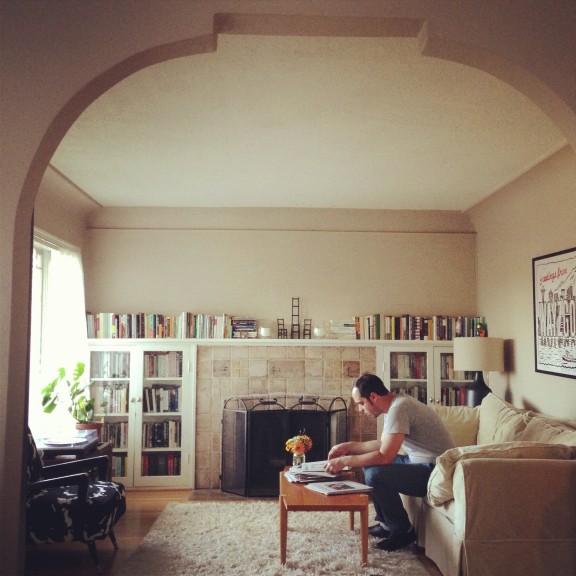 As I sit here at my too-tall desk writing to you today, I know it’s time to start a new album. This summer hasn’t been the most leisurely. Or the most spirited. Or the most fun, to be honest. It has brought about many new challenges with Marge, from hiring my first set of employees to finessing the farmers markets, new packaging projects and a shared commercial space downtown. I bit off more than I could chew. And I realize that now. 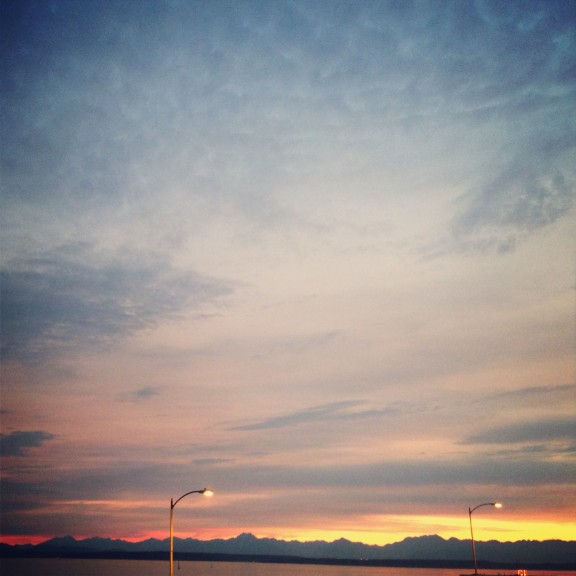 In George Saunder’s beautiful commencement speech that I know many of you have read, he says this about the constant focus on work: “Accomplishment is unreliable. ‘Succeeding,’ whatever that might mean to you, is hard, and the need to do so constantly renews itself (success is like a mountain that keeps growing ahead of you as you hike it), and there’s the very real danger that ‘succeeding’ will take up your whole life, while the big questions go untended.” The problem with being blessed (cursed) with what Sam and I sort-of-lovingly call my “relentless, urgent ambition” is just that: it feels urgent. I have a difficult time recognizing a marker of success and celebrating it, instead always looking ahead to the next goal. The next big thing. And this month, it’s left me pretty exhausted.

As Christopher Kimball says in the close of his letter, “We don’t choose how many albums we fill during a lifetime, but we can decide how to fill them.” There are no summer do-overs, and that’s o.k. But I want to be very deliberate this fall about what will fill my album. I want it to have more play and less “relentless, urgent ambition.” I don’t think starting with breakfast cake is an awful idea, do you? 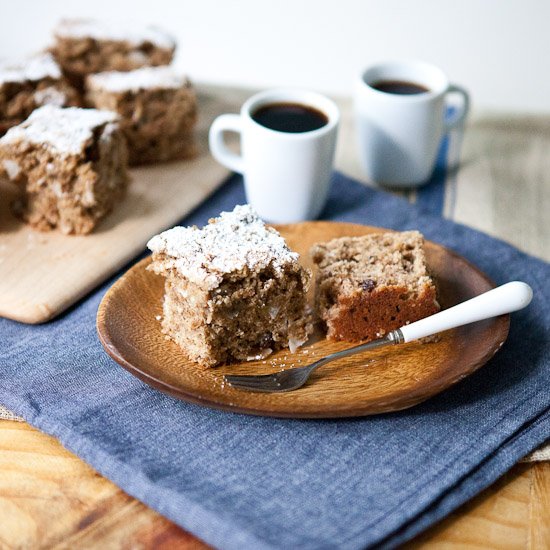 I developed this recipe for Attune Foods using their Raisin Bran cereal, along with ripe bananas and buttermilk, walnuts and coconut. It’s made with a mix of whole-wheat and barley flour and has a sweet fragrant quality (without too much sugar), making it a new morning favorite around here. It’s hearty, a touch crumbly, and season-less. Perfect for the next new album I’d say.

Get the Recipe on Attune Foods Blog: Banana-Bran Breakfast Cake