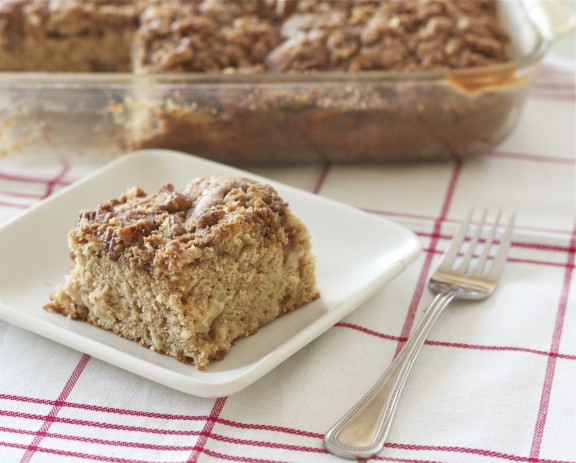 This past week was one in which I found out that one of my good friends is pregnant with her first child, and another friend and her partner just bought a new home and moved to Oakland. A friend across town had thrown out her back and another was just returning from a long trip, exhausted and jet-lagged. It was time to bake a little something. Something that was equal parts celebration (a baby!) and ‘take it easy.’ Something with ingredients I had on hand and that I wouldn’t have to rush around to shop and prep for. Something like Harvest Apple Coffee Cake. 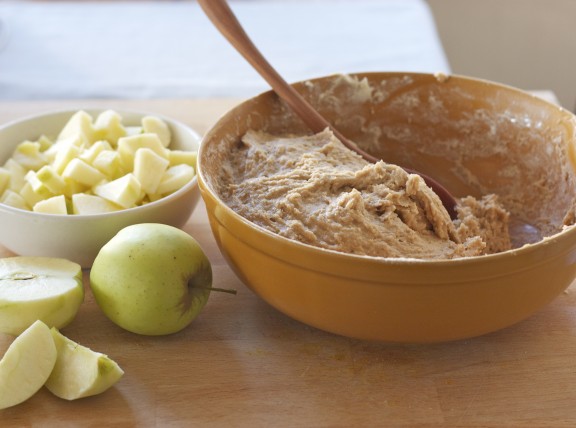 I like this recipe a great deal because I generally have apples laying around in the fall. Either friends have gone apple-picking, my mom picks some up for me at the farmers market, or I stumble across a too-good-to-pass-up deal at Berkeley Bowl, there’s generally a small village of them on my kitchen table. And buttermilk. Can we just say a word about buttermilk? I often buy a quart of it for something I’m baking and then have the rest just hanging out in the fridge–so this recipe takes care of that issue, too. 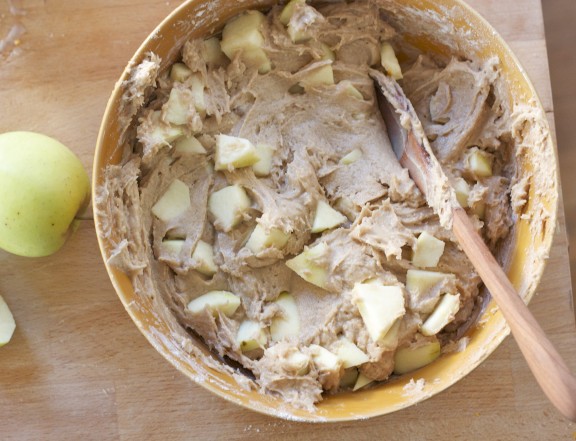 I’ve been doing some research on American cookery at the turn of the century for a small project I’m working on, and stumbled across this wonderful manual at the library called The American Frugal Housewife by Lydia Maria Child. It was first published in Boston in 1829 and reprinted through 32 editions until 1850, and is essentially a book of economical housekeeping hints ranging from reusing scraps of old bread to make coffee (what?!) to washing your hair with New England rum. A quote that I particularly like is when Child says, “The true economy of housekeeping is simply the art of gathering up all the fragments so that nothing be lost. I mean fragments of time as well.” That’s what this coffee cake is all about. It’s about using up the fruit and butter and sugar that you have at home, folding it all together, baking it, and delivering it to friends to say Welcome Home or I Hope You Feel Better. That’s all: gathering fragments into something greater than its pieces. And passing it on. 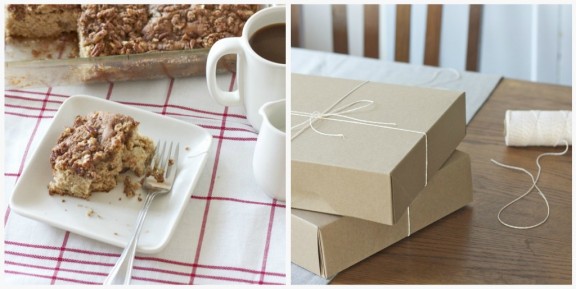 This recipe is very loosely inspired by a recipe in the new The Beekman Boys 1802 Heirloom Cookbook called “Company’s Coming Apple Cake.” Its named as such because it’s simple to throw together with ingredients you likely have on hand for nights when you find out last minute that neighbors are stopping by after dinner.  I was inspired by the recipe but wanted to make a lightly spiced morning coffee cake instead of an actual cake, and wanted to use whole-grain flour and a different streusel topping (the same streusel I use on top of Marge pies at the farmers markets). This coffee cake will hold up beautifully for 2-3 days if wrapped well and left out on the counter. This makes it nice for slicing off bits for afternoon tea, too (wouldn’t want to waste any, after all). I think Lydia Maria Child would approve.

While I usually bake with Granny Smith apples, they tend to dry out a little in this coffee cake. Honeycrisps or even Golden Delicious are perfect here. You could also use pears instead of apple or walnuts or hazelnuts instead of pecans. I love baking with whole grain flours whenever possible; you want coffee cake to be pretty fluffy, so I opted to use King Arthur Flour’s white whole wheat flour along with a traditional white all-purpose flour. This combination works well and gives the cake a little more heft without verging on dry or overly dense.

Preheat the oven to 350 F. Grease a 9 x 13-inch baking pan. With a stand-mixer or hand-beaters, beat the butter until creamy, roughly 1 minute. Gradually beat in the two sugars until fluffy, 2-3 minutes. In a medium-sized bowl, combine the flour, cinnamon, nutmeg, baking powder, baking soda and salt. Whisk together with a fork or small whisk. Set aside.

Add the eggs to the butter mixture, one at a time, beating after each addition just to incorporate. Add the four mixture, alternating with the buttermilk, beginning and ending with the flour. Fold in the apples just until combined and scrape the mixture into the prepared pan. This is the point in which you really don’t want to overmix the batter: just fold and be done with it.

Scatter the topping over the coffee cake batter in an even layer. Bake for 50 minutes, or until a toothpick is inserted into the middle and comes out clean or with just a few crumbs attached. Cool completely before serving.