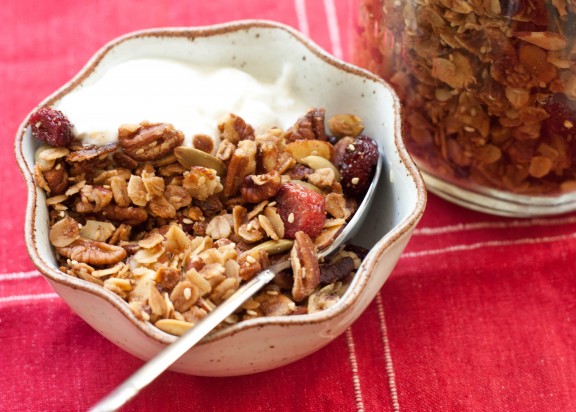 I got an email from a reader last week that made me think. And then smile. She mentioned how she liked my blog because it was about food while simultaneously being nothing about food. The more I thought about it, the more I realized she’s probably right. If you really just wanted a quick granola recipe, there are many other places you’d probably go first. But here we are. And it’s  late on Tuesday night and it kind of feels like fall rather than summer and my sixteen year old dog is snoring at my feet. I’ve made a fresh batch of granola for the morning, there’s a giant mosquito buzzing around my desk that I can’t seem to catch, I’m drinking lime fizzy water from a straw and wishing my sister a happy first day of work tomorrow. So, yeah. I like talking to you about baking and salads and homemade ice cream.  But I also liked talking to you about books and yoga and how amazing afternoon naps are. About movies and wacky seasons and travels. And hopes and family and pretty dishes. All that. Hopefully you’re down. I’m guessing since you’re still reading this paragraph, maybe you are.

Coincidentally, I’ve been powering through a book that’s relevant to this idea of being about something while not being about it at all. Have you read Murakami’s What I Talk About When I Talk About Running? On the surface it’s a memoir about Murakami’s long-distance running career. But if you asked me what the book was about, I probably wouldn’t even mention running. Instead, it’s about finding happiness in what you do, questioning why you commit yourself to certain activities, “the blessed right to grow old” and change.  It’s a sweet exploration of one man’s passion and how it has seeped out into every other area of life. It makes you think about yours: passion and life, that is.

There’s this kind of loose logic to Murakami’s life narrative that I admire. While it’s quite structured with running schedules, book tours, and teaching gigs–it’s also quite spontaneous in that he follows the pulls that lead him towards happiness or fulfillment. He doesn’t question them. He doesn’t try to make much sense of them (because how can you really make sense of getting up at the crack of dawn to run 26.2 miles?). The blind following of those pulls and tugs: we don’t do that enough. At least I don’t.  It’s much easier to excuse them as too whimsical or expensive or unrealistic. But lately I’m all about diving in. Right now I have friends that are starting their first business, beginning new jobs, being published, getting married. There are thresholds everywhere I turn and it’s exciting and full of risk and craziness and blind dives without looking back. 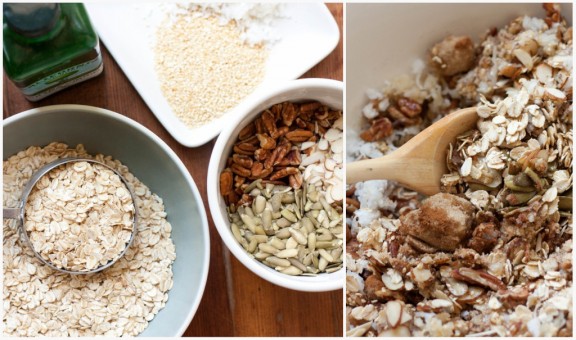 It doesn’t always have to be marathons or marriages we’re talking about here. It can be as small as trying out a new granola recipe because you’re pretty sure it’ll knock the socks off your mornings in early August. That’s what I did today. Many of you may remember the buzz around this time last year when The New York Times published their recipe for Olive Oil Granola. I never tried it because I’m basically married to my own recipe which I created while, coincidentally, training for my first marathon in Colorado. But lately I’ve been curious–what if I took the components I love about my granola and blend in olive oil, maple syrup, and kosher salt as the New York Times does? Well, a whole lot of goodness happens. That’s what.

So I’ll leave you with this simple, adaptable, morning-changing recipe and a quote from Murakami. He should have the last word here.

“And I hope that, over time, as one race follows another, in the end I’ll reach a place I’m content with. Or maybe just catch a glimpse of it”

I love making granola in a convection oven because it cooks evenly and you don’t end up with burned bits around the edges. So I’ve included cooking times for both a convection and a standard oven here. This recipe is also forgiving, so feel free to use your own mixture of nuts and dried fruits. And play around with different olive oils. It’s amazing how a fruitier oil honestly conveys that taste once baked. I’m hooked.

Preheat the convection oven to 275 or the standard oven to 300 F. With the exception of the cherries, mix all the ingredients together in a big bowl and spoon out onto a large, rimmed baking sheet.

Granola will be done when it’s golden brown and well toasted. Remove from the oven and stir in the dried cherries. Let cool completely. Serve with dollops of plain yogurt and fruit.